Why do we list location? This is so you can know, in most cases, where the evergreen shrubs you buy are coming from.

Breakdown of scores from each of the 10 factors we evaluate. You can read details on what each category means and how we score it here. 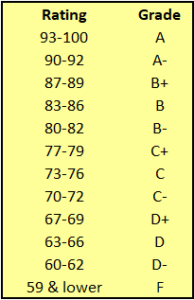 Jackson and Perkins Nursery rating came in at 78.5 for a C+ grade this month.  Jackson & Perkins are known more for their roses but do carry a decent selection of trees, shrubs & perennials then most people may realize. As we head into September Jackson & Perkins has already started promoting their fall plants. They have a page dedicated to their fall shipping schedule. Since the do sell some bare root plants, it's good to know when your order might arrive.

It won't be long before they bring out their Holiday items. We bought a pre-decorated tabletop Christmas tree from Jackson and Perkins for the 2018 Holiday season.  Pictures of the unboxing and a full review are here; Jackson & Perkins Un-boxing. It's been in a container outside enjoying our warm weather and growing at an impressive rate. We had to transplant it into a larger container but brought it indoors for the holiday's. It was nice!

Jackson & Perkins was originally founded in 1872.  It has bounced around with different owners over the years.  It's current owner also runs Wayside Gardens (www.waysidegardens.com) and Park Seed (www.parkseed.com).

Jackson and Perkins .com got pretty good scores for most items we review.  They are better known for their roses but they do carry some of the more popular evergreen shrubs. They also have some citrus trees in stock occasionally.  I like how Jackson & Perkins clearly show the size/height and they seem to have a good range of sizes from 1 quart to 3 gallon containers. They also clearly mark a product is out of stock, saving you some time when you're moving around the Jackson & Perkins site.

Their Guarantee is kind of long.  Boils down to a replacement or credit if you can prove you followed their planting & care instructions. Jackson & Perkins ship costs are in the middle of the pack.  Ship times are spelled out, which is good.  It's kind of long but  details justify the length.

What were the red flags?

We deducted 3 points for the following reasons:

We use cookies to ensure that we give you the best experience on our website. If you continue to use this site we will assume that you are happy with it.OkPrivacy policy