Nellie J Stevens Holly is one of the most popular evergreen shrubs for creating privacy. Nellie Stevens Hollies are considered one of the fastest growing holly shrubs with a growth rate of 3 feet a year.They have a natural pyramid shape, dense foliage and grow up to 25 feet tall. To create a privacy hedge, plant them 6 to 8 feet apart. 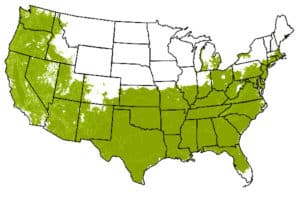 Nellie Stevens Holly are relatively drought tolerant once established. They grow very slowly, however, without adequate water. This is especially true early on when it is growing new roots. Watering at least twice a week is recommended.

Nellie Stevens Holly trees grow well in a wide range of soils, ranging from all sand to compacted clay. Nellie Stevens have relatively shallow roots.  Mix your soil with organic compost or soil when planting in sandy or clay soils. Since the roots aren’t very deep, it is important to dig your planting hole about twice as wide as the container so the root system will be able to easily expand.

When planting any container tree or shrub, it is important not to plant it deeper than the pot. You should see the soil from the top of the plant when you’re done. Otherwise you risk the stem rotting and your new plant could die.

Nellie Stevens Holly generally do not need pruning. If you want to keep it bushier, you can trim the top, central leader(s). General pruning can be done twice a year, after new growth as emerged. It is not recommended to prune more than 3 to 4 inches at a time.